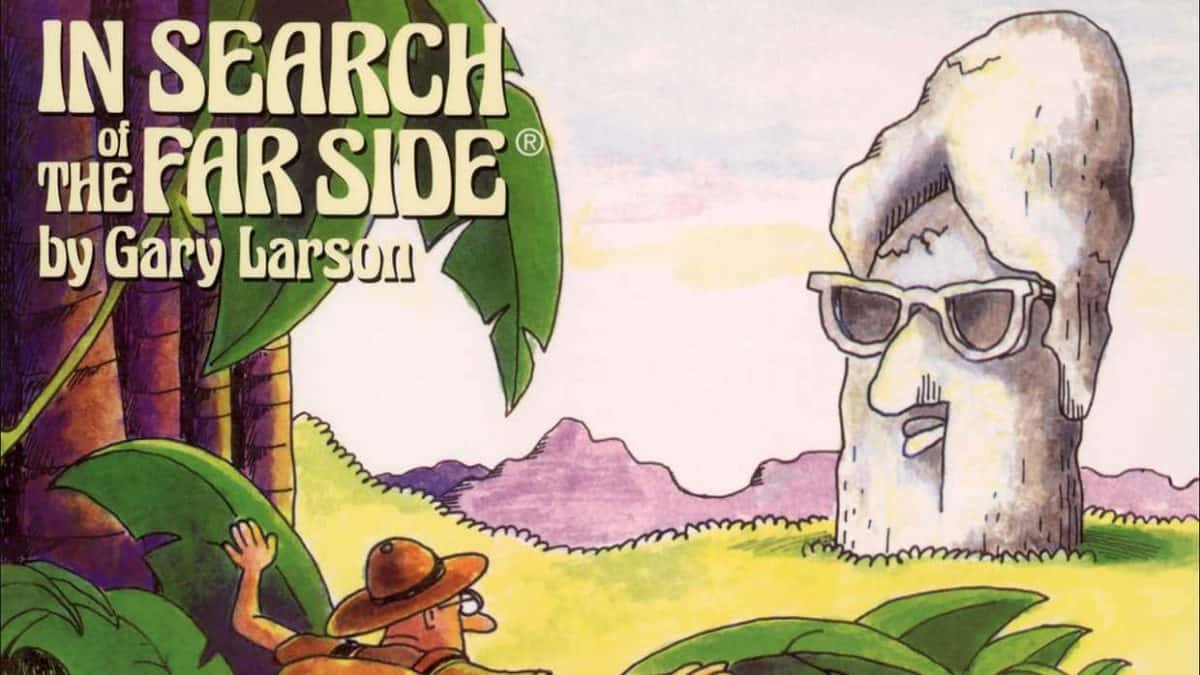 Quietly, with no fanfare, a newly created THE FAR SIDE website updated this weekend promising “A new online era of The Far Side is coming!” It may have a quiet announcement, but it hardly took anytime at all for the Daily Cartoonist to notice, report, and begin a cycle of speculation about what it all meant.

Not one to wait for answers, we here at ComicsVerse want in on the speculation. Before that, though, we need to know what came first. Let’s take a look at what THE FAR SIDE was and how it ended the first time around.

The announcement that get FAR SIDE fans’ hearts a-racing. (Courtesy of TheFarSide.com)

THE FAR SIDE: Fifteen Years of Brilliant Nonsense

THE FAR SIDE began on  January 1, 1980 and ended exactly 15 years later on January 1, 1995. A single frame strip written and drawn by creator Gary Larson throughout its run, FAR SIDE wonderfully combined the surreal and the mundane. It became a favorite of the newspaper comic section almost immediately. Larson created an anthropomorphic world full of elephant beat poets, cow cookout enthusiasts, and doomed self-aware dinosaurs. His humans wrestled with the cosmic, the existential, and the utterly common with an equal mix of cluelessness and pomposity. For fans, Larson delivered laughs with the bizarre, the esoteric, the dark, and the base. The mix of it, in fact, was the delight. One day you would be laughing at a math proof joke, the next a pun placed in the mouth of a cat would make your sides hurt.

In 1995, new strips ended with then 45 year old creator-writer-artist’s retirement. Like Larson’s dinosaurs, FAR SIDE fans all saw it coming and yet could do nothing about it.

THE FAR SIDE LIVES ON!

FAR SIDE would continue on in newspaper syndication for over a year more, reproducing the greatest hits. Even after that fans could turn to daily and monthly calendars, 16 thin reprint books, 8 larger omnibus style reprint — including 2014’s THE COMPLETE FAR SIDE which, ironically, was not quite complete — and two animated specials.

Fans could also find them online. All over the place. However, it turns out that that was a bit… unpopular with Larson himself.

The one person, it turns out, who was not thrilled to find THE FAR SIDE online was  Gary Larson. In  1999, as it became increasingly here that the internet was no passing fad, Larson took issued a letter requesting fans stop reprinting his strips online. While he sighted the loss of income to both himself and his publishers, he went on to explain that this was not his primary concern. Instead, Larson explained, it had more to do with the emotional impact on him.

Even as he admitted, “I confess to finding it quite flattering that some of my fans have created web sites displaying and / or distributing my work on the Internet,” he found himself unnerved by it. “These cartoons are my ‘children,’ of sorts, and like a parent, I’m concerned about where they go at night without telling me,” he further elucidated. There was an emotional impact to seeing his work show up places where he did not put it.

While many, including the individual who posted the letter, listened and took down the strips, the internet of that era was very much unregulated. Moreover, it seems, Larson was not a particularly litigious man. As a result, many, even today, continue to post and repost the strips against Larson’s wishes. 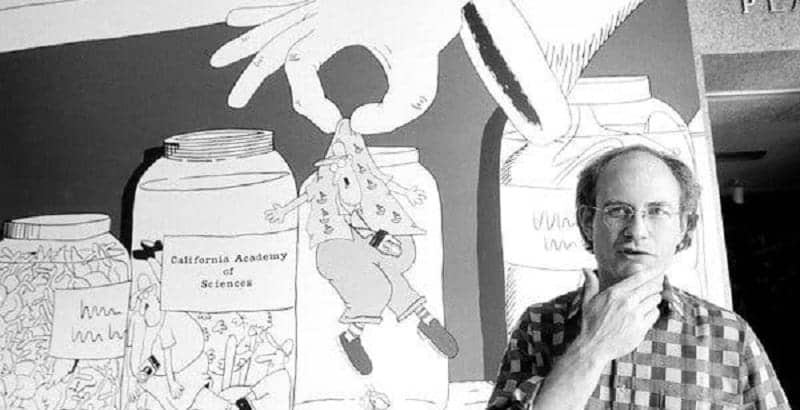 FAR SIDE writer-artist Gary Larson circa 1985 strokes his chin wisely. (Courtesy of the New York Times)

All The Way Back Around to Here, THE FAR SIDE

Then, on September 13th of this very year, TheFarSide.com, THE FAR SIDE’s personal website, went live. The image, showcased above, spoke to the strip soon be “unfrozen.”

But what does that actually mean?

The most obvious answer is the one most fans are cheering for: brand-new FAR SIDE strips!

However, that’s hardly the only choice.

For one, given the history of Larson and the internet, this could simply be a site dedicated to the showcasing of existing FAR SIDE strips in one place. With an online presence, it may make it easier to control where his “children,” end up. Or perhaps it gives him greater legal standing to go after those who did not pay his now 20 year old message heed.

For another, it could speak to a single project. As noted, in the past, FAR SIDE has had two animated specials. Perhaps the site exists to let fans watch a third one. Or this site could be the way to purchase said special, exclusively. Think Jim Gaffigan’s NOBLE APE special.

It could be another sort of project as well, either a short-term run of new strips, a new book, new merchandise — your t-shirts, mugs, etc — or some other project our stunted imagination just is not  thinking of.

At this point, though, we, like so many fans, are keeping hope alive. Brand new THE FAR SIDE strips, online? Yes, please!