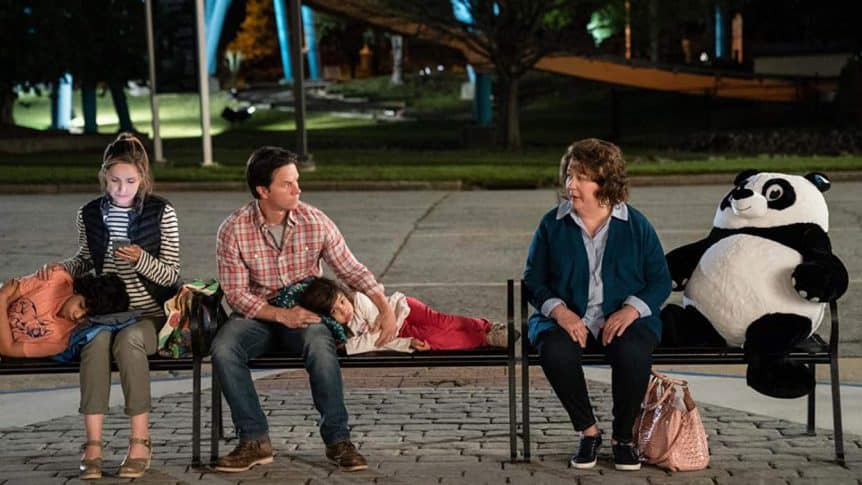 Nearly every client I have these days has come from at least one foster home situation. Sometimes they left because the family was not a good fit. Other times, their behavior made families feel as though they could not possibly keep the client. Or, worse, the foster family wished to adopt but either DCF or the bio parent(s) refused to approve it. As a result, I approached INSTANT FAMILY with trepidation.

Could a comedy starring Mark Wahlberg –who earlier this year starred in the meat-headed and reductive MILE 22 — explore this topic with any kind of nuance or thoughtfulness? Could the writer-director Sean Anders and his writing partner John Morris — the team behind the DADDY’S HOME films and THAT’S MY BOY — find the humor in foster care without making the whole thing feel like an inaccurate and/or lazy affair?

Lo and behold, I was wrong.

The Idea Behind INSTANT FAMILY

Pete (Mark Wahlberg) and Ellie (Rose Byrne) put off their children while they got their home flipping business up and running. Now years later, they are successful and seem committed to a childless existence. An offhand comment from Ellie’s sister Kim (Allyn Rachel), however, changes that. It sparks Ellie to start to really reconsider if that is what she wants. After some research, Ellie finds herself drawn to the idea of fostering children with an eye towards adoption. Pete, resistant, nonetheless looks at the website. After a perusing, he cannot ignore how unfair the foster situation is.

Joining an agency run by Karen (Octavia Spencer) and Sharon (Tig Notaro) and attending classes besides a motley crew of other would-be foster parents, the couple finds themselves growing increasingly excited by the idea. However, a brief visit with teenage Lizzy (Isabela Moner) and her two younger siblings, the disaster-prone Juan (Gustavo Quiroz) and the very loud and pro-potato chip Lita (Julianna Gamiz), brings doubt into their plans. After most of Ellie’s family affirm those beliefs, however, she and Peter realize they can’t not go through with it. Hijinks and heartbreaks ensue.

Anders and Morris’s script is… well… good. All the characters have unique voices while still exhibiting certain tics and expressions that mark them as connected to others.

The film populates the support group with a diverse set of featured players, including a religious couple Dirk and Dana (Gary Weeks and Joy Jacobson), the same-sex interracial couple David (Kenneth Israel) and Michael (Randy Havens) and a prospective single mom/perfectionist October (Iliza Shlesinger) who dreams of becoming the next BLIND SIDE story. None are held up as stereotypes, and the movie clearly cares for them all even the patently ridiculous October.

Even better, the script manages to give each of these characters funny things to say. They have depth, they feel real, and, importantly for a comedy, they spit out laugh lines with a fair amount of regularity.

Casting The Leads of INSTANT FAMILY

Rose Byrne is comedy gold. I want her to get back to dramatic work at some point, but she is so excellent at comedy. Can I award her the title “Queen of Comedy”? Is that something I’m allowed to do?

Mark Wahlberg has also proven himself an adept comedic presence of the years in movies like TED, THE OTHER GUYS, and DATE NIGHT. Here he uses some of the tricks we’ve seen him develop in those movies, especially the screaming triggered temper. However, he finds new beats to hit, making his Pete a sort of relaxed yin to Byrne’s more volatile yang. As a typically conflict-loving presence in movies, it is interesting to see as the more conflict-averse partner. He also has a bit more heart here than I think I’ve seen him use in previous roles.

Isabel Moner is head and shoulders better than she was in TRANSFORMERS: LAST KNIGHT but then, that was TRANSFORMERS: LAST KNIGHT. No one deserves to have that movie held against them. Playing her age, she makes Lizzy feel like a battered product of a lousy system, both armored and brittle, well-informed and so disconnected from her own feelings and actions.

Gustavo Quiroz crushes in the physical comedy department, repeatedly bearing the brunt of pratfall after pratfall with a wonderful sort of “woe is me” charm. His quick turns to repeated apologies also land as both funny and reminders of what the kid has endured throughout his life.

Casting the Rest of the INSTANT FAMILY Call Sheet

INSTANT FAMILY has a deep bench, so I am going to work through this quickly. Tig Notaro and Octavia Spencer make a great odd couple as the social workers, their contrasting energy pushing off and comingling with each other so well. Everyone in the support group is solid. A very good mix of salty and sweet, if you will.

All the actors making up Ellie’s family bring it as well. I especially like Tom Segura’s always happy to watch the family fight Russ and Rachel’s angrily dedicated to positivity Kim. Margo Martindale as Pete’s mom is predictably good with one particular scene about what it feels like to be a foster kid that she crushes. The movie also has several surprisingly strong cameos, including one from the very game Joan Cusack.

Anders continues to be a fine comedic director. He’s not remaking the craft but he knows how to capture a scene.

In the dramatic moments, though, I was more impressed. He captures hard emotions with a sort of unfussiness that I appreciated. He also employs some more complex visual metaphors than I have seen him use in his films before. I don’t want to make you think he’s on the precipice of a Best Director nod or anything, but he showed some growth here that I found heartening.

The Accuracy of INSTANT FAMILY

That said, from talking to my clients and those parents, as well as the experiences of an ex-girlfriend’s family who did foster care work for years, this movie gets it.

INSTANT FAMILY, essentially, captures real life with jokes here. It gets and presents how the system can damage kids to the point that they sabotage their lives even, or rather, especially when things seem to be getting better. Or leaves them constantly cowed. Or makes them so dependent on the familiar they only want to eat one food ever.

Additionally, it captures how people in the system are all trying to do their best, but are still human and capable of making mistakes or agreeing to things only to realize there is no way they can really honor their commitment.

Lastly, it shows how complicated, rewarding, and painful it is to be a foster family. The movie has heart, but it never becomes schmaltzy. It never sacrifices its honesty to make the audience feel good.

I don’t know how this happened, but…INSTANT FAMILY is good. It’s honest, it’s funny, and it resists the temptation to drown the proceedings in sentimentality. Look, I’m as stunned as you.