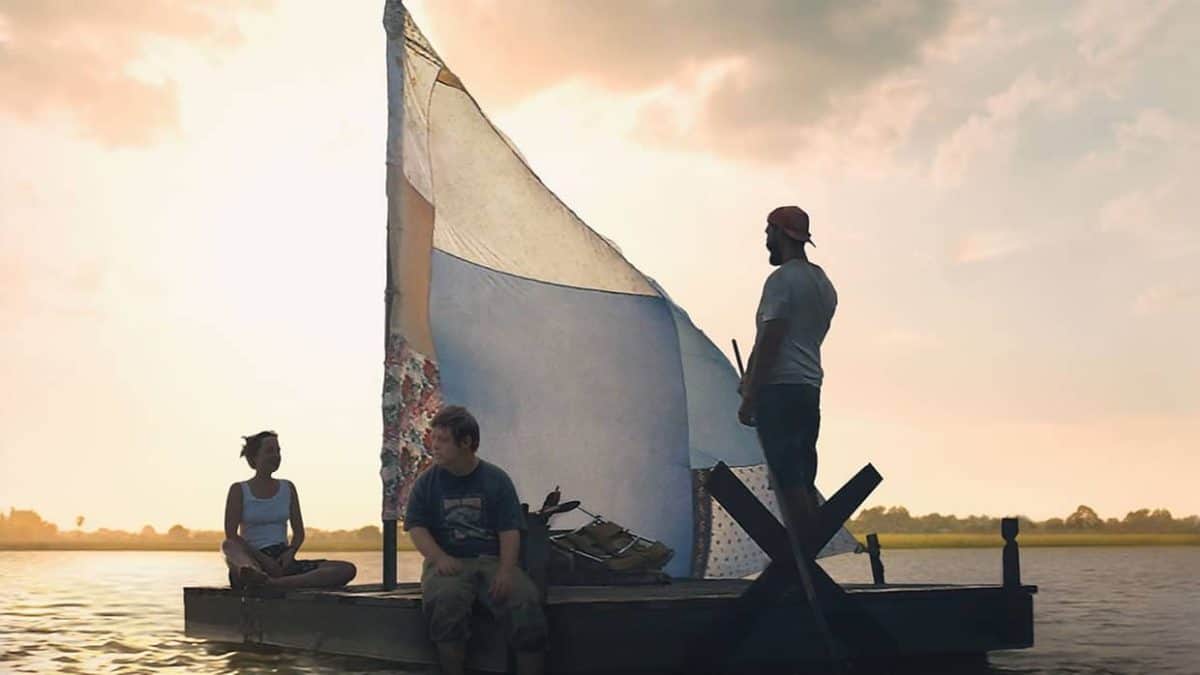 Not sure if you have heard, but non-blockbuster cinema is dead. I think the Mouse killed it. Or maybe super heroes? Anyway, indie cinema has especially died. Apparently, I must have imagined ever seeing these movies. Still, I’ll review them anyway. For kicks.

So hop aboard for reviews of the assassin drama ECCO, the emotional ringer AFTER THE WEDDING, the amnesia crime caper KILLERMAN, and the journey film THE PEANUT BUTTER FALCON. 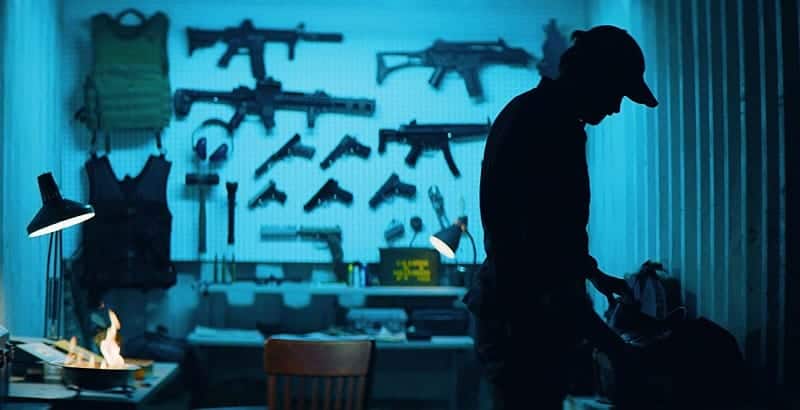 In broad strokes, this indie that I liked but almost no one else did follows Michael (Lathrop Walker) at several ages. The action revolves around his attempts to extract himself from a shadowy organization, stop murdering for hire, find love, and disappear.

ECCO unfolds at a slow pace, the moving between what seem to be disparate moments in time giving the whole thing a dreamlike feel. Walker adds to the feel, giving his reformed killer a fuzzy feel. His personality slides away and back in place depending on context or audience.

While the film thinks its twists are cleverer than they are, seeing the larger plot in the distance does not diminish the odd ride. Enhancing the atmosphere is a deeply unnerving discordant score from Chris Morphitis. Also worthy of shoutout is the four-person makeup team Nancy J. Hvasta Leonardi, Christina Kortum, Hazel Williams, and Patti Wilmot who subtly render the effects of violence, age, sun, and surf on Michael’s features and body.

There are some unfortunate tropes the film indulges in and, besides the central twist, the plot is pretty typical. However, for two hours, the tone and images cast a spell. 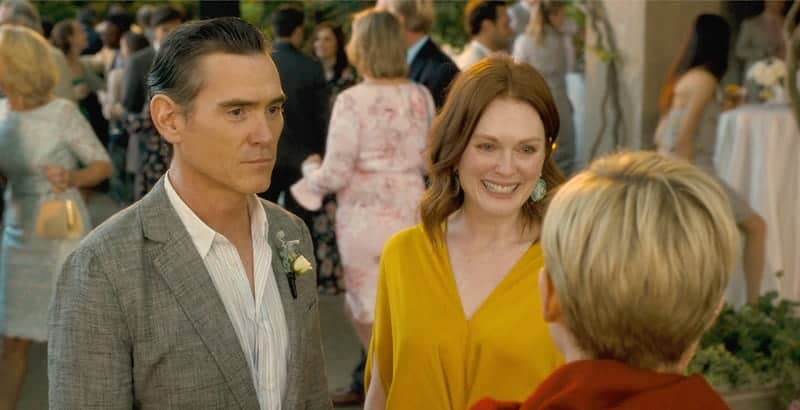 Billy Crudup, Julianne Moore, and Michelle Williams (back to screen) have what appears to be a very pleasant conversation in AFTER THE WEDDING. (Courtesy of Sony Pictures Classics)

Indie Cinema is the Uninvited Guest: AFTER THE WEDDING

A lot happens in AFTER THE WEDDING. A lot, a lot. From a practical standpoint, too much really. It is just revelation after revelation and each seems like it would be enough in and of itself to support a movie. The trick of WEDDING though is that it lands it blows true. Your emotions get so expertly tweaked that you rarely, if ever, pause to consider just how much the movie has decided to throw at you at once.

The two women at the center of the movie, Julianne Moore’s Theresa and Michelle Williams’s Isabel deserve a large measure of the credit. Moore has proven over the years that no one goes to pieces in so many interesting ways on camera as she does and she gets a couple of big moments to do that here.

Williams, by contrast, is a study in smaller actions and reactions. Almost unreadable at first, she dangles microexpressions, waiting for them to be noticed. The moments where she cracks are all the more shocking as a result but somehow deny her and the viewers catharsis. Williams makes sure to let us feel as tight and tortured as Isabel does in the situation she finds herself.

The two of them deliver so many strong moments, it covers up a lot of the film’s weaknesses including the fact that it is largely a movie of moments. There is also a lot of weirdness around ages and how the timeline is almost impossible to make work with both the actors’ actual ages and the characters’ stated and implied ones.

Still, when it comes to WEDDING, emotions trump logic by a long shot. 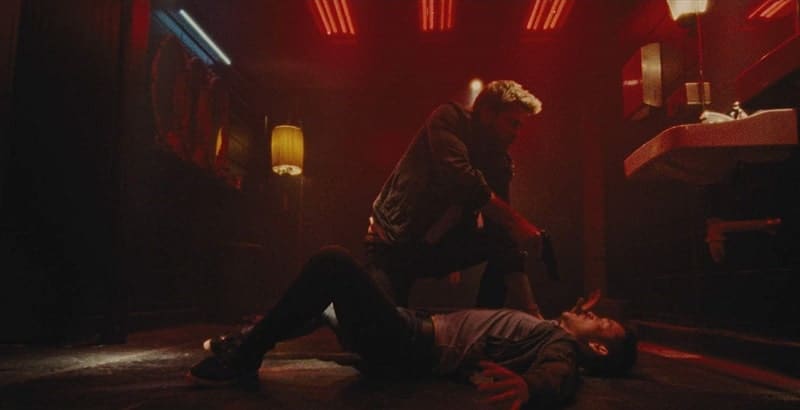 KILLERMAN does this thing where they provide a final Chiron giving you a brief description of what happens to two characters after the film ends. It is presented like the kind you see in based on true events movies. It turns out it was just a device, KILLERMAN is entirely fictional. However, my reaction to that final caption tells you a lot about the quality of the film. I immediately thought, “I should look this up on Wikipedia. I bet that’ll be more interesting.”

As it stands, KILLERMAN is built on a pillar of clichés. Worse, it generally fails to utilize the talents of those involved. Diane Guerrero — so good on the latest season of ORANGE IS THE NEW BLACK — seems particularly ill-served. She — and the movie — gain little from her part as the pregnant girlfriend of our protagonist Moe Diamond (Liam Hemsworth).

Moe Diamond, by the way, is a money launderer and, you guessed it, jeweler. The fact that the movie makes this choice but does not expect viewers to anticipate certain developments is, well, wild. 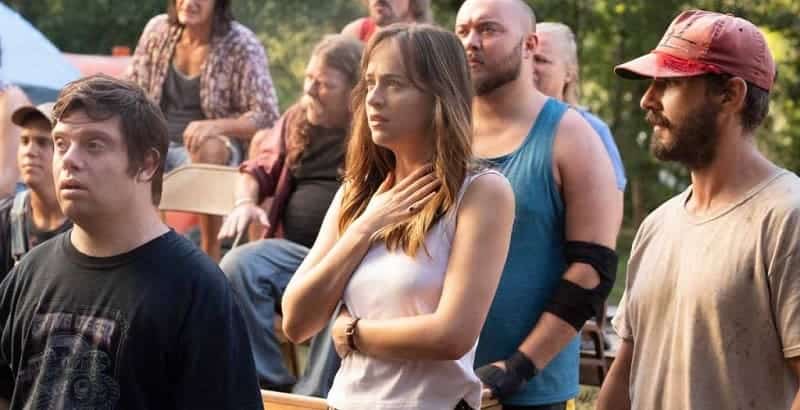 Indie Cinema is Going Down the Coast: THE PEAUT BUTTER FALCON

The plot logline for THE PEANUT BUTTER FALCON sounds a bit like a nightmare. “Zak (Zack Gottsagen) a man in his 20s with Downs Syndrome escapes the nursing home where he lives, meets up with a grief stricken ne’er Tyler (Shia LaBeouf), and the two take a trip together and grow closer. The man’s social worker, Eleanor (Dakota Johnson), an attractive woman with her own pain, pursues and then joins them becoming a sort of surrogate family.”

It sounds syrupy, well intentioned but clueless, and riddled with potentially problematic characterization. Yet somehow FALCON largely dodges the entire minefield it seems barreling towards.

Part of that is the tartness of its characters. While none of our three leads are bad people, they’re all prickly and a bit difficult. They can be short, rude, and in the case of Tyler, a bit creepy. They also are motivated by an undeniable base level of decency that keeps them grounded and worth cheering for. Thomas Hayden Church, as Zak’s idol the Saltwater Redneck, similarly captures that feeling. He’s just another decent but broken person trying to do right just a bit more than wrong.

The film’s villains played by John Hawkes and Yelawolf come across fairly two-dimensional. On the other hand, they also take up very little screen time. They’re also outdone for sheer unapologetic meanness by former wrestler Jake “the Snake” Roberts as Sam/Samson, an aging backyard brawler.

FALCON goes to magic hour a time or two too many. Otherwise though it maintains a kind but firmly distant view on the characters. Directors Tyler Nilson and Michael Schwartz — with Cinematographer Nigel Bluck’s aid — largely let us come to the characters ourselves. They avoid the trap of feel goodism to deliver a prickly kind-hearted work worthy of Zak, Tyler, and Eleanor themselves.