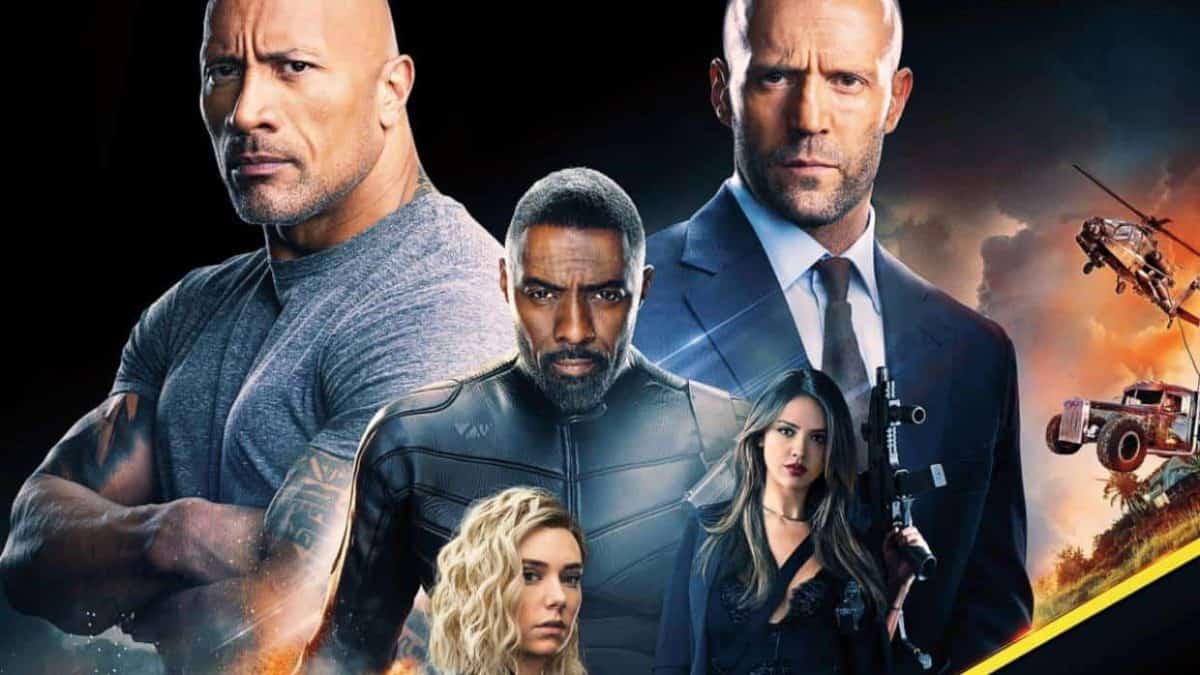 Certain movies get labeled critic-proof. No matter what the critics say, people will still throw money at them. As many a commenter has loved to point to me since last year, BOHEMIAN RHAPSODY is that kind of film. Other films are critic-proof because we literally cannot help but love the product even while we see how utterly idiotic it is. Most of the FAST AND FURIOUS movies fit this bill. Which side of the critic-free continuum will FAST AND FURIOUS PRESENTS: HOBBS & SHAW fall on? 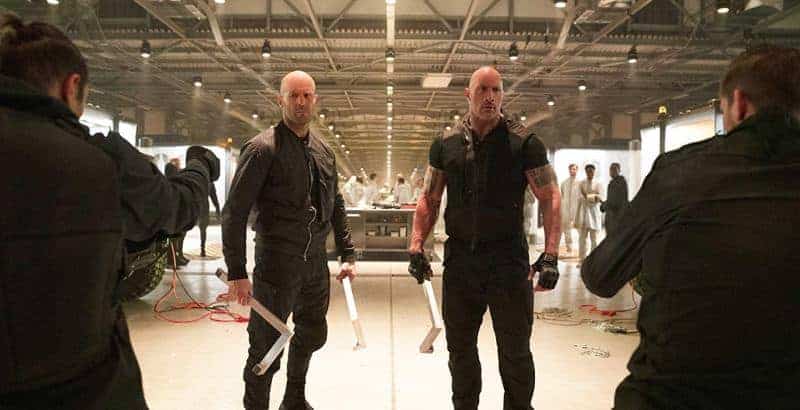 Jason Statham and Dwayne Johnson are ready to bring the pain train into the station in HOBBS & SHAW. (Courtesy of Universal Pictures)

The Idea Behind HOBBS & SHAW: A Fast and Furious Story

You know Deckard Shaw (Jason Statham) has a now deceased bad guy brother and a still alive gentlewoman criminal mom Queenie (Helen Mirren). It turns out he also has a law-enforcement type sister Hattie (Vanessa Kirby). That is until she accidentally takes on Etheon, a shadowy corporation all about the purging of the weak to bring about the next evolutionary jump for humanity.

By the time the dust settles, Brixton Lore (Idris Elba) has killed everyone else on her team and she has injected herself with an experimental “programmable” virus. Now on the run from MI-6 who thinks she is a traitor and Etheon who wants to rip the virus back out of her, Hattie is getting a taste of what her older brother went through when he was framed as a traitor.

Despite his…umm…extra-legal status, the British still bring in Shaw to help. The Americans decide to lend Lucas Hobbs (Dwayne Johnson) for support. Odd Couple chemistry dressed up as antagonism and incredible displays of violence unfurl. 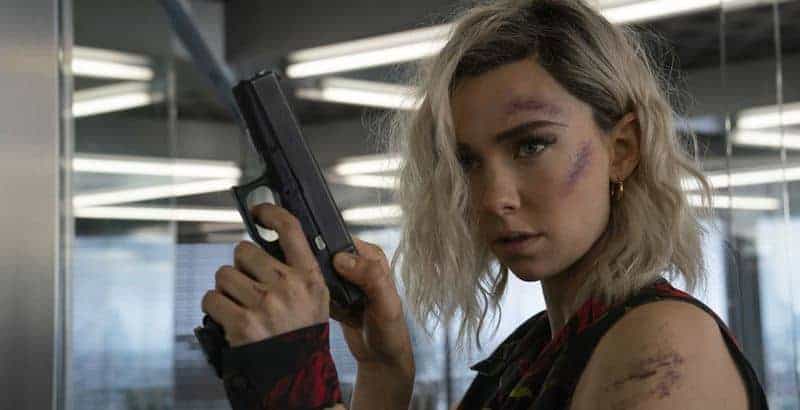 Vanessa Kirby is cocked, locked, and ready to rock in a moment from HOBBS & SHAW. (Courtesy of Universal Pictures)

As you might expect for with this movie, this altar to masculinity, much of the script spends plenty of time on insults and testicularly-oriented jokes. Ball humor only goes so far for me. However, when that gets left behind, the duo are naturals at delivering insults. Even when the lines are kind of weak, Statham and Johnson go all in, selling them hard enough to force a smile across the viewer’s face.

The other function of the script is setting up action set pieces. Chris Morgan, by this point, knows the ins and outs of getting to the action. Drew Pearce, his co-writer here, is new to the franchise. However, after working with the likes of Shane Black, Pearce is plenty familiar with the kind of tone FURIOUS films need.

More importantly, Morgan and Pearce prove adept at weaving character into the action. Until the film devolves into (enjoyable, wild) melee, each action scene is specifically oriented towards the stars’ abilities and the characters’ personalities. They are incredibly insightful fight sequences, to be sure, but one does not turn to F&F for intense character studies. It is dumb nonsense, but it’s the kind of dumb nonsense that plasters a smile on your face. 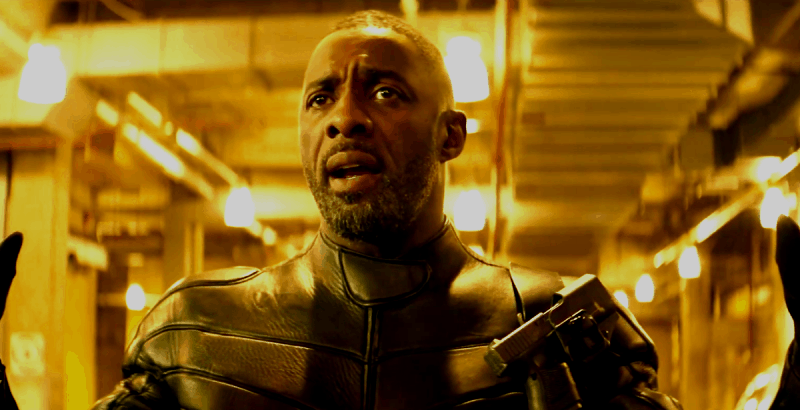 Idris Elba encourages you to throw your hands in the air in a scene from HOBBS & SHAW. No word on if he wants you to act as though you don’t care. (Courtesy of Universal Pictures)

I don’t want to be overly simplistic here but did you like Johnson as Hobbs in the previous FAST films? Ok, good. You’ll like him here. The movie adds a new facet. Now Hobbs is almost preternaturally well-liked. Makes sense given Johnson but it does somewhat runs aground of previous FAST continuity. I do not imagine many people will be upset.

Statham has fun with his now roguish Shaw. The only bum note I have to say about his work is that he seems increasingly to be talking out of just the side of his mouth as the movie goes on. It does not impact his work, per se, but it is weirdly distracting.

The real delight is Kirby as Hattie. She is quick with wit and a line and more than keeps up with her muscle-y co-stars on the physical front. Between this and last year’s MISSION: IMPOSSIBLE, she seems to be an increasingly reliable woman action star and we never have enough of them.

Elba is mostly a physical presence. With his impressive array of skills, studios ongoing inability to truly tap his talent is increasingly frustrating. He’s by no means bad but it would have been nice if the movie gave him a little space to really sink his teeth into some juicy lines. 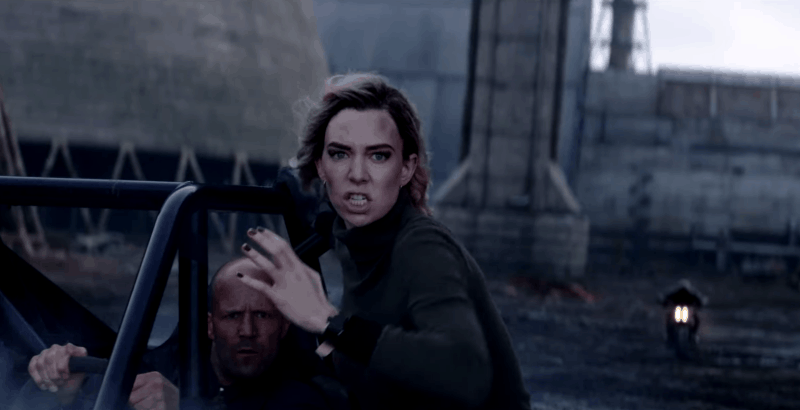 Vanessa Kirby and Jason Statham coming at ya in HOBBS & SHAW. (Courtesy of Universal Pictures)

Casting the Rest of the Callsheet

There are three cameos that I want to point to but I do not wish to spoil who the actors are. I will say that all three actors, new to the franchise, show up for just a scene or two each. The scenes, though, exist as meals for the actors. Fans of the actors in question will surely get a kick out of their appearances.

Wrestling fans, however, prepare for disappointment. Everyone’s favorite champion Roman Reigns does not say a single word that I can recall. 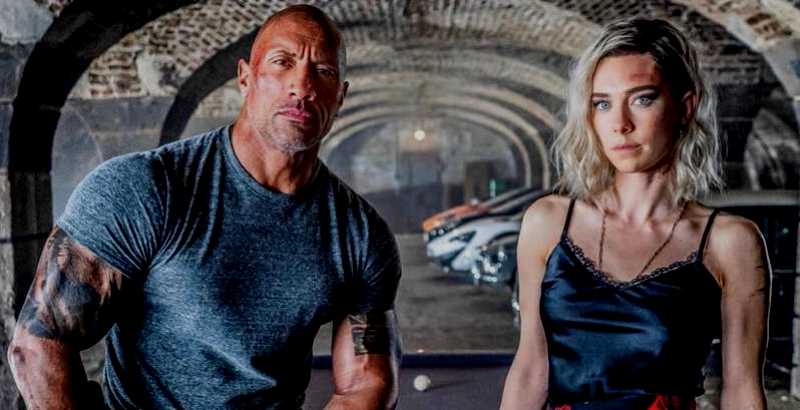 Dwayne Johnson and Vanessa Kirby give great face on the set of HOBBS & SHAW. (Courtesy of Universal Pictures)

David Leitch continues to improve with each directorial project. ATOMIC BLONDE had top notch action scenes and gorgeous lightning, but struggled with creating a world or characters worth being interesting beyond that. DEADPOOL 2 got the characterization much better but strangely suffered a bit on the action front.

HOBBS & SHAW marks the first time I felt Leitch had an aim to his direction beyond making the whole thing look cool. Time and again, he balances the frame with Johnson on one side, Statham on the other. They are divided by an object, an individual, or some background feature creating a line between them. At other times, he uses a literal split screen to achieve the effect. At others, they exist in different scenes but their actions, their movements, mirror the other’s in the scene before or after. It is WAY more attention to detail than you’d expect in this kind of movie and it absolutely elevates the material.

Here, he really seems to be getting the mixed right. Considering how ludicrous HOBBS & SHAW gets, Leitch keeping his hands firmly on the wheel is a feat in and of itself. That he swings so much of the action while keeping the leads so firmly foreground is the cherry on top. 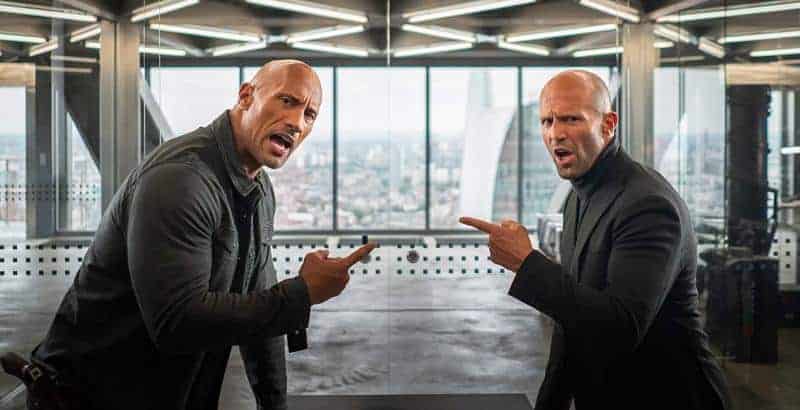 Dwayne Johnson and Jason Statham argue over who has the better bald pate during a moment from HOBBS & SHAW. (Courtesy of Universal Pictures)

Everything about HOBBS & SHAW is screamingly over the top. The characters, the problem, the set pieces. It is achingly stupid. It is all sizzle no steak. And damn what a good time. It is the perfect kind of movie for the dog days of summer. It’s a heap of glorious spectacle topped with a tureen of cheese. Could there be a better excuse to spend over two hours avoiding the sun and soaking up that sweet, sweet AC?