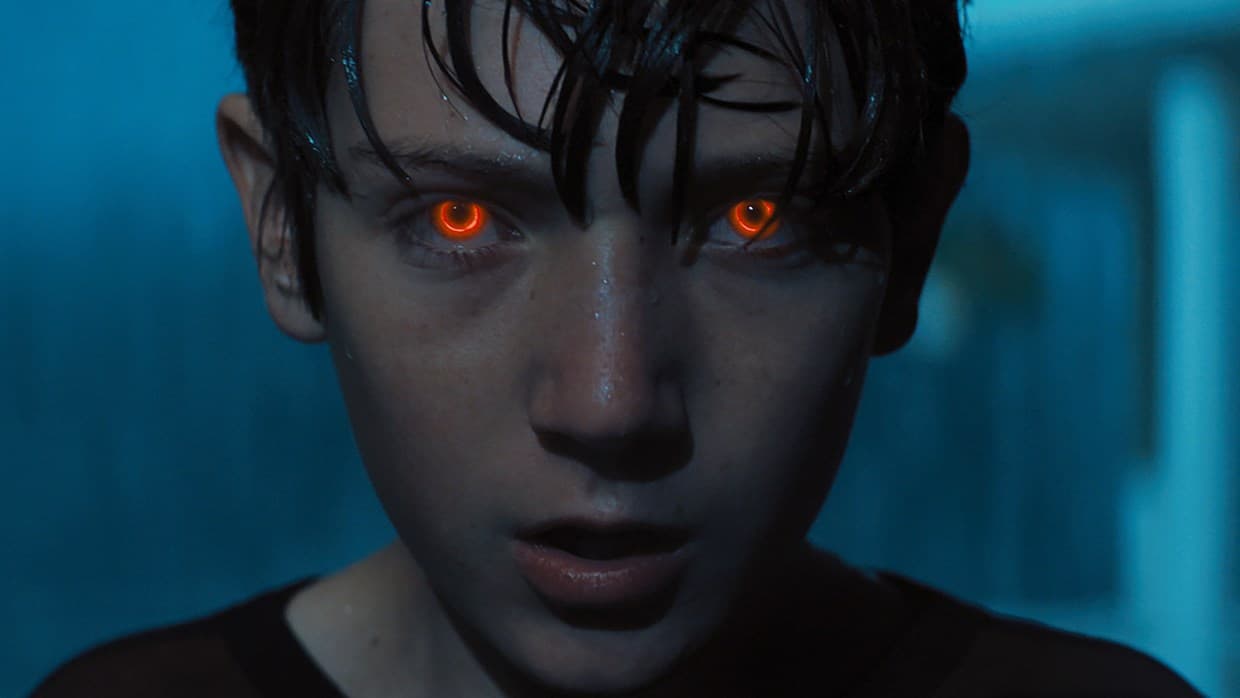 BRIGHTBURN makes sense coming out now. After all, superheroes are king at the box office. Taking what is most popular and often critiqued as “safe” and twisting it to the monstrous is a well-worn form of storytelling and one that can deliver great shocks and, even, insight. Your general moviegoers have not experienced a superhero-gone-bad during our current superhero movie renaissance. The closest they have been “treated” to is the minute or so it took Clark to get his head back on straight after his resurrection in JUSTICE LEAGUE. Maybe, if they really pay attention to the entertainment press they might have heard Zack Snyder imply that Superman could also be a white collar criminal.

For comics fans like myself, however, we have been saturated with “what if Superman/boy but bad” for years and years and the availability of such stories have only seemed to increase. We have Flash gone bad in HEROES IN CRISIS. We have Superman gone bad all over the place, most recently the INJUSTICE series and video game. Over a decade ago, DC first began to shred their post-Crisis continuity with Superboy Prime punching reality and then decapitating scores of forgotten Teen Titans. Alternate universe Supermen have behaved badly in IRREDEEMABLE and SUPREME POWER.

So can BRIGHTBURN overcome that ennui to deliver a story as new and shocking as it wants us to think it is? And can it do that without leaving the more “casual” fan behind?

The Idea Behind BRIGHTBURN

The Breyers, Tori (Elizabeth Banks) and Kyle (David Denman), have been trying to have a child for years. Yet, despite being together and reckless since high school, they have not realized that dream.

Then, one night, a rocket crash lands in the woods just beyond their property line. Inside, a baby, improbably, slumbers.

Twelve years that that boy has grown into Brandon (Jackson A. Dunn), a quiet seemingly artistic boy with a gift for memorization. A mama’s boy in the best sense of the word, he is doted on by Tori and they share a morning tradition of hide-and-seek despite his adolescence bearing down on him.

However, with the arrival of his 12th birthday comes complications. He starts to hear voices, experience fugue states, and gained super powers. And when he begins to understand what those voices are saying, well, there will be hell to pay.

Casting the Lead of BRIGHTBURN

Dunn decides to go flat with Brandon, increasingly draining the emotion from him the more he “accepts” his extraterrestrial origins. It is a smart choice. A largely unemotional tween telling his counselor “it would be especially bad” for her to share her findings with his school and the sheriff is undeniably creepy.

The trajectory of the film lets him down, though. We get so little of Brandon pre-transformation that we have no real sense of what is being lost. The voice from his rocket might be what activates him but it looks, for all the world, like he has been living this way under his parents’ noses for years. Thus, Dunn’s performance never registers as tragic as it should. In what you will notice will become a theme throughout this review, it brings the creeps but without any depth to make them linger.

The Rest of the Callsheet

The only two supporting players who really matter are Banks and Denman. Insofar as the movie gives us a Brandon that the world is losing as his powers take over, it all comes from their performances. Denman has a wonderfully wordless scene looking through his collection of pictures and mementos of his son’s life as, we later realize, he contemplates a parent’s worst nightmare.

However, Banks is far and away the MVP here. Her transition from proud mother to a parent clinging to denial because the truth is too terrible seems almost too good for this movie. Banks has done so much comedic work over the years, it can be hard sometimes to remember the kinds of chops she brought to movies like the HUNGER GAMES series and OUR IDIOT BROTHER. Hopefully, this gets noticed enough that she gets a chance to put in some more dramatic performances. Don’t get me wrong, I love her in the WET HOT universe or in the PITCH PERFECT movies. I just would love her to get more to do beyond absurdity.

The Gore of BRIGHTBURN

James Gunn produced BRIGHTBURN and his name has been, shall we say, generously deployed in advertisements for the movie. However, it is always difficult to say how active a role a producer actually played. For instance, ERASERHEAD was produced by Mel Brooks. I am not sure, however, how much of that film’s tone, look, or plot you can own to Brooks’ sensibilities. So with Gunn is producing, it may mean he helped with the money, it may mean he was on set all the time.

One area where it feels like it may be the latter is the gore. Viewers who have followed Gunn before he became “that GUARDIANS OF THE GALAXY guy” will know that he has long had a gift and enthusiasm for blood and viscera and BRIGHTBURN definitely feels like a throwback to those days.

I am not a big gore fan so I cannot say I loved this decision. However, from a technical standpoint, it is all very well done. The mix of practical and CGI effects together gives us things like the grimmest use of heat vision on-screen to date and a… less than connected jaw.

Again, not my bag. But for those who love that sort of thing, I imagine there will be great appreciation.

The Concerns of BRIGHTBURN

As alluded to in the headline and the discussion of Dunn’s performance, this movie is about Superboy-gone-bad and only about that. I kept wanting to mine it for themes of toxic masculinity or how parents deal with the reality of their children going astray, but the film stubbornly resists it.

The closest it has to a theme is nature vs. nurture. However, do not expect a great debate to occur. This movie has its flag firmly planted on the nature side of things from the jump. In a movie that represents a Superman story — the ultimate triumph of nurture — gone awry, it makes sense to argue for nature. That said, a little tension in that dichotomy would have been to the benefit of the movie.

At the end of the day, BRIGHTBURN has one goal: to be a scary movie about a super-powered kid gone full murderer. While that does not make it deep, that can be fine — provided it brings the scary.

BRIGHTBURN does have some definite scares to it. There is a family restaurant scene, you see a bit of it in the trailers, that effectively sells both the fear of Brandon’s power and the fear of his presence. After all, he proves frightening on both counts. It is never just that he is super fast or super strong. He also generally feels disconcerting and icky, especially with his sewn up wool hat mask.

In other moments, the horror comes from one side or the other. When Brandon visits a classmate in her bedroom to give her flowers, the menace is him. We know in the back of our heads that he could violently dispatch her, but what truly unnerves comes from him being there and his wholesale ignoring of social cues. During a confrontation with the sheriff, however, the fear comes purely from Brandon’s power. It all works quite well. Even better, it comes together in a final “battle” with his adopted mom that largely trades pyrotechnics for quiet moments that favor deep sad revulsion over the more traditional horror movie killfest we just witnessed.

The postscript, however, will likely send viewers home feeling disappointed and largely without fear. Without spoilers, the climax brings Brandon to the crest of a moment he depicts in his art binder. The sketch shows the fate of the world that his rescue rocket encouraged him to pursue. The one that he has evidently accepted. It would prove a truly terrifying fate for humanity. The epilogue, on the other hand, shows Brandon engaged in a few fairly benign acts of destruction.

Yes, the casualties would be terrible. Given his power, though, they are almost yawn-worthy. Largely freed from any of his remaining humanity in the climax and possessing a tween’s creativity and inherent gift for uncontemplated cruelty, what we see should be wild and bone-chilling. Alas, one might even leave the theatre thinking that besides Brandon’s hometown the rest of humanity will be largely unaffected by this visitor’s violent desires.

The filmmakers set out to make a horror movie about Superboy-gone-bad. They did. However, if you hunger for more in your horror than a high gore quotient and some scares, you will likely leave disappointed. Even judging the movie on its own merits, I confess I am among the disappointed. It feels like just when the movie became the most powerful version of what it wanted to be, it blinked and let us down easy.