A common criticism of trailers is that they reveal too much. Go on the internet and read the comments on trailers (don’t really do this, never read the comments) and you’ll find people by the truckload bemoaning what it reveals. Still, every now and then, it turns out the trailer does not even accurately capture the tone of the movie, nevermind reveal everything. Such is the case with ABOMINABLE.

Is that to its benefit or harm though? Let’s find out! 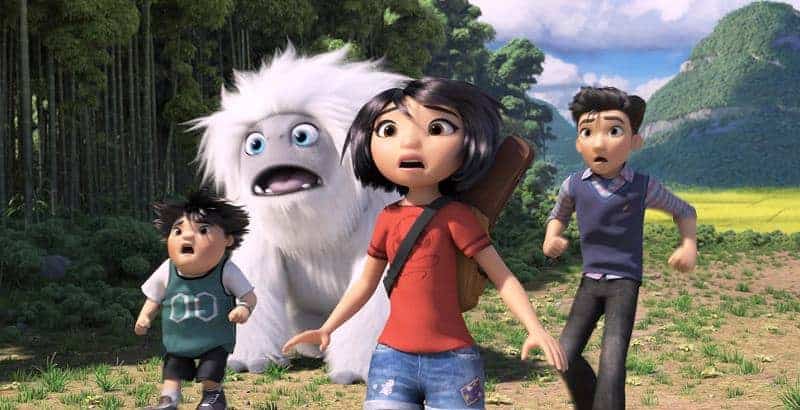 Chloe Bennet takes the lead on the Surprise Olympics while Tenzing Norgay Trainor, Albert Tsai, and Joseph Izzo fall in behind. (Courtesy of Dreamworks)

The Idea Behind ABOMINABLE

Yi (Chloe Bennet) is a teen in an unnamed Chinese city. She lives with her mom (Michelle Wong) and grandmother Nai Nai (Tsai Chin), but only just. Her waking hours are spent secretly doing odd jobs or on the roof practicing a violin she insists she sold. Yi’s father died recently and she has closed herself off from everyone even as she tries to make enough money to take the trip across China that her father always spoke of.

Meanwhile, the Yeti who we will come to know as Everest (Joseph Izzo) escapes from eccentric billionaire Mr. Burnish (Eddie Izzard) and his wildlife conservationist employee Dr. Zara (Sarah Paulson). By fate, he ends up on Yi’s roof hideaway. As Burnish’s urban hunt closes in, Yi, Everest, Yi’s popular neighbor Jin (Tenzing Norgay Trainor), and Jin’s basketball obsessed younger cousin Peng (Albert Tsai) take off — some willingly, others not so much — on a mission. The goal is to return Everest to his home, the mountain from which he draws his name. Burnish, however, needs the Yeti to avenge a past humiliation and has no intention of just letting the cryptid disappear into the upper atmosphere. 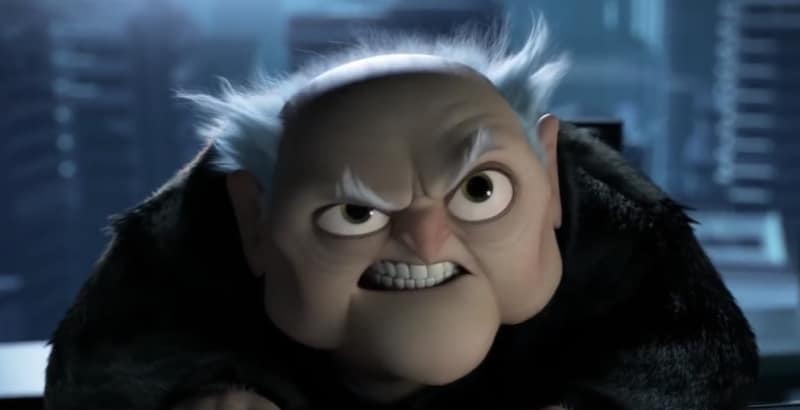 Eddie Izzard would appreciate you not mention his owl-like appearance, thank you. (Courtesy of Dreamworks)

When one speaks of Dreamworks Animation, they are, in a way, discussing three distinct styles. Forefront for most is the successful, glib, fun but empty works like the latter SHREKs and TROLLS. Second, they offer what feel like refugees from Disney early 90’s heyday minus the spark, your PRINCE OF EGYPT and SPIRIT: STALLION OF THE CIMARRON. Lastly, in the middle lies the best Dreamworks. Here you find smart, pretty films that pack an emotional punch. The HOW TO TRAIN YOUR DRAGON series and RISE OF THE GUARDIANS are a couple of examples of this Dreamworks. Looking at their list of films, this is actually probably the most common mode Dreamworks operates it, but as they never reach the money-making level of SHREK or BOSS BABY, they don’t really fit forefront in our minds. Happily, ABOMINABLE fits in the last category.

Jill Culton, the woman behind MONSTERS, INC’s story, has much to do with this. The fairly standard unlikely group goes on a journey plot gets a huge boost from Culton’s script. Layering melancholy and moments of surprising wonder without tipping everything over into schmaltz, the screenplay lends depth to ABOMINABLE. While obstensibly a story about a mythical beast escaping a lifetime in a zoo, it ends up being about the importance of connection even as it acknowledges the pain those connections can bring.

That makes it feel like a bit of a slog, perhaps, but Culton peppers the jokes and sense of fun in enough that neither the children or adults will end up drowning in the heavier topics. 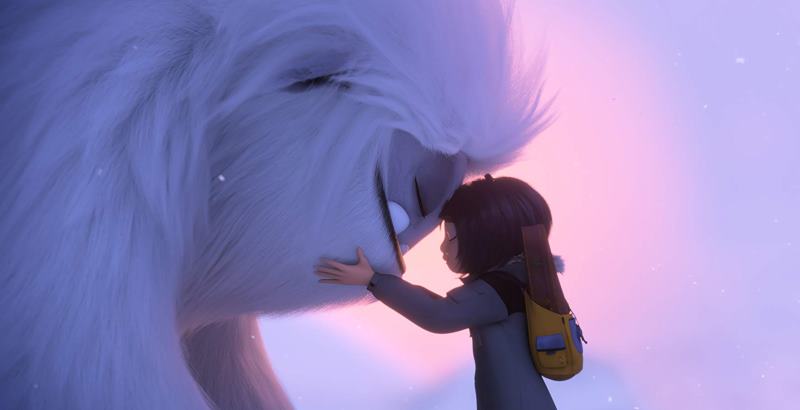 Joseph Izzo and Chloe Bennet have a good cuddle. (Courtesy of Dreamworks)

In many ways, ABOMINABLE is a bit of a throwback in terms of casting. The lead, Chloe Bennett, and the two chief antagonists, Eddie Izzard and Sarah Paulson, stand out as being the closest thing to “stars”. The rest of the cast, happily, is populated by reliable supporting players, kid thespians, and experienced voice actors, most of Asian origin. It is great to see a predominantly Asian cast — only Izzard and Paulson aren’t — starring in a movie that unfolds entirely in China. The lack of big celebrity actors further helps things. There is no “spot the famous actor’s voice” here.

The best news, however, is they do strong work. There is not a bum performance in the bunch. Tsai Chin’s Nai Nai feels a bit cartoonish (haha) in the early going, but grows as the movie goes on and never lapses into caricature. She is comedic relief to be sure, but the kind that doesn’t make you feel a bit queasy.

The blend of ages amongst the kid characters does not derail things either. Even though Bennet is probably almost a decade older than the next oldest kid, Trainor, you can’t “feel” that on the screen. They seem plausibly young and close in age, an important thing to nail when they get the majority of lines and screentime. 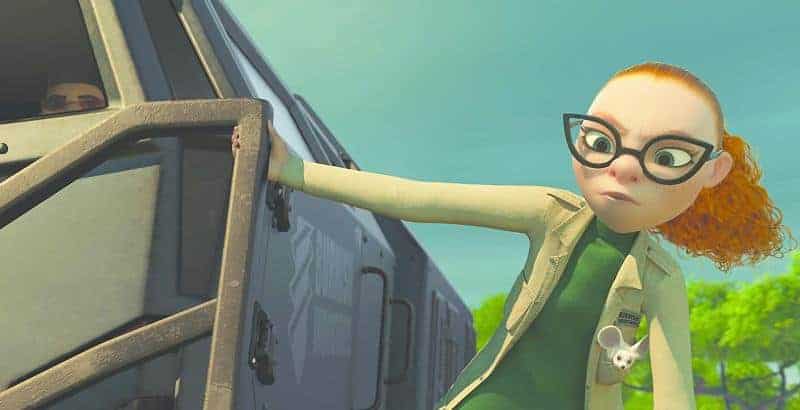 Sarah Paulson gets a good stretch in during ABOMINABLE. (Courtesy of Dreamworks)

The Animation of ABOMINABLE

ABOMINABLE is a beautiful movie. It does not boast Pixar’s fastidiousness, but not every story calls for photorealistic snow or fur. Some, in fact, might benefit to a looser style. This film, for instance.

While in the city, the film nicely balances how it illustrates the buildings in the distance and Mr. Burnish’s building with Yi’s apartment building and immediate neighborhood. The closer things are to Yi’s life, the stronger the detail, the more depth they have. The farther away or the more connected to Mr. Burnish, the vaguer they become. It simulate looking up at a skyscraper in the distance from a mere 5 story apartment. More importantly, it nails what it most feel like to be Yi. She knows her life intimately so the animation is alive with details. The world behind her neighborhood, however, is ill-defined, more concept than concrete.

Similarly, as the quarter goes on their journey, the locations start similarly abstract but gain structure and weight the longer the characters stay in them. As they learn their environments, the backgrounds grow sharper, the world more defined.

The human characters body style and head shapes are pleasingly diverse without making anyone seem garish or laughable. Everest himself is a wonderful bit of creature design, distinctive from the other Bigfoot style cryptids we’ve seen in animated movies this year and in pop culture in general. I appreciate how the animators render him as a more of an ape in posture and gait than the classic upright furry person design we more commonly see. 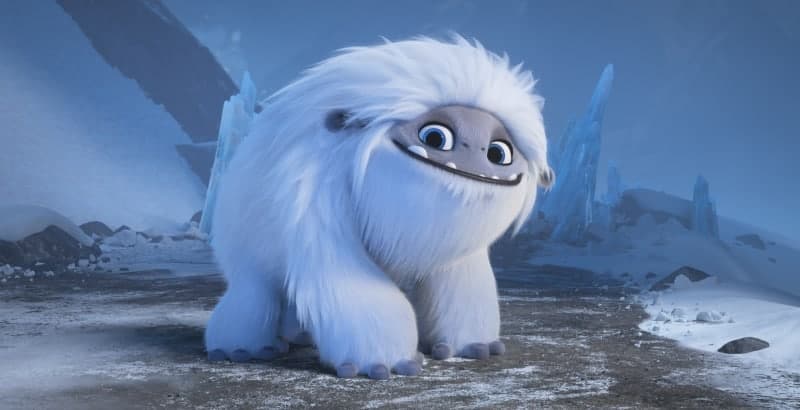 Everest is the kind of cryptid it is impossible to stay mad at in ABOMINABLE. (Courtesy of Dreamworks)

A delightful fall surprise. Fun but not superficial, bittersweet but not suffocated by it. It may not be as good as HOW TO TRAIN YOUR DRAGON but if Dreamworks wants to live in this mode going forward, I think we’d all be happy.