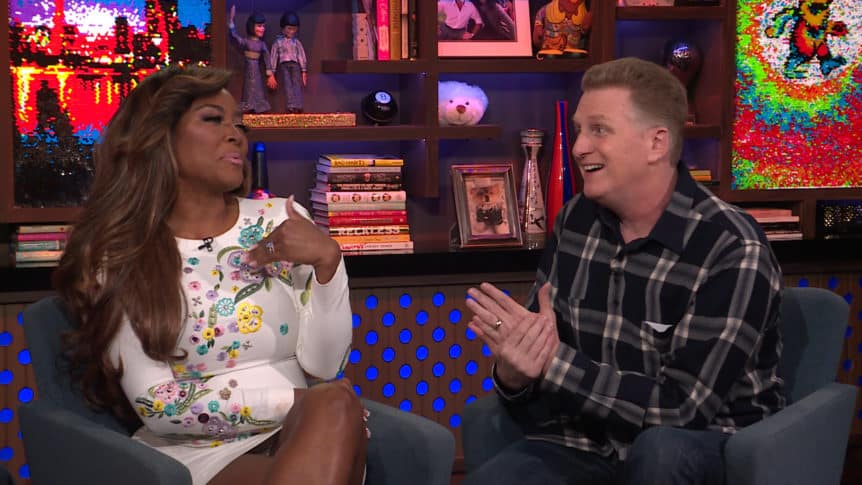 Blame it on the alcohol. Blame it on the weed. Or blame it on Andy Cohen and his comforting demeanor. Celebrities start feeling good and saying things. That’s how many a feud started on Watch What Happens Live with Andy Cohen. Some of these feuds you will instantly recognize, others you might need a refresher on. Either way, their dramatic juiciness remains undeniable.

As always, I tried to find the exact clips that I reference, but some weren’t available. Have yourself a blast reliving some of the most delicious feuds that started or re-started on WWHL!

I’m going to come right out and say it. I’m not the biggest Lisa Vanderpump fan. Is she lovely, amazing, graceful, and talented? Absolutely! However, I can’t turn a blind eye to every other season having a plot where she gets accused of manipulating people.

I watched Days of Our Lives in high school. Eileen had already established herself as a daytime icon. She portrayed four different characters on the same show and was almost nominated for a Daytime Emmy Award for her roles as Kristen DiMera, Susan Banks, Penelope Kent, and she also played a male character! In other words, Eileen Davidson is a total badass. Had she been on RHOBH that season, I have full confidence Eileen would’ve taken LVP to task!

In the above clip, Andy asks Eileen a series of questions about the show. There are at least two good LVP jabs in there. But would Lisa Vanderpump take it sitting down? Of course not, she’s Lisa-fucking-Vanderpump, and she punched right back on Twitter with two separate tweets. Why two? Well, the first one tagged the wrong account.

She gets it right the second time though!

The feud is so juicy! I wish Eileen would return to RHOBH. Do you? Not hating Lisa, by the way, but I am loving Eileen!

This feud honestly seems like a case of miscommunication. Rebecca Romijn tells Andy that she thinks a difference lies between modeling for social media and high fashion modeling. For some unknown reason, Yolanda Hadid took it to mean she referred to her daughters Bella Hadid and Gigi Hadid.

In the since-deleted tweets, Yolanda calls out Rebecca insulting her daughters. The only problem is that she never did it which she explains here. Years later, Rebecca updates us on their feud in the below video.

If you don’t know what happened between Lala’s fiance Randall Emmett and rapper 50 Cent, you’re in for a treat. I won’t get into here because it’s so much. The point I want to make is that the original fight they had was behind them. Until Lala spoke on WWHL.

50 Cent Responds To Lala Kent’s Allegations Of Being A Cyber Bully; Releases Details Of Repayment Contract!

Lala was hardly the first feud 50 Cent got into that started on Watch What Happens Live! A few years ago, Vivica Fox had a lot to say about those gay rumors surrounding 50 Cent. Specifically, she thought they might be accurate. In the video, she explains what she felt was weird about 50’s relationship with Soulja Boy.

I remember watching 50 Cent respond to Vivica Fox’s allegations live on the show. I laughed my ass off. I’ll let 50 tell it since he tells it best.

To be fair, this feud kind of started on ABC’s The View. However, I needed Bethenny Frankel’s response so badly, that I had to include it on this list. Perhaps, instead of Meghan McCain, I should have added Sunny Hostin to this roster of women who could replace Bethenny on RHONY.

Apparently, in the Hamptons, Bethenny Frankel exited her mansion to yell at Sunny Hostin’s children. Sunny said she jumped in front of her kids to tell Bethenny off. However, Bethenny gets hit with some Housewives amnesia and denies ever meeting Sunny.

Don’t get me wrong. I cracked up when Bethenny answered, but I am dying to know what really happened. Love or hate Bethenny, Sunny Hostin certainly makes for a worthy rival.

God, I miss Brandi so much. She brought so much drama to the show. Brandi seems like the kind of girl who could hang out with a bunch of guys and blend in. I love that about her. Real Housewives of Miami star Joanna Krupa tweeted in to Watch What Happens Live, and Brandi was not having it. Brandi heard a rumor about Joanna and as you can see, she had no problems sharing it! All I can say is that it involves the female bodypart with nomenclature akin to a colloquialism for the domesticated feline.

Believe it or not, Joanna Krupa sued Brandi over this. I forget what happened, but I know they settled, and Brandi issued a public apology.

I’m not conservative by any means, but I love Meghan McCain. When I watch The View clips on YouTube, I always notice the comments about her appear particularly cruel.

While Meghan and I might disagree about politics, sitting in a room with her and discussing Housewives sounds unbelievably fun.

Andy Cohen asks Meghan her honest opinion about RHOBH, and Meghan does not pull any punches. It’s something I enjoy about her. Apparently, she was not a Teddi Mellencamp fan at the time.

Poor Teddi Mellencamp, people always pick on her! Kate Chastain watched an RHOBH scene where Teddi cried about not having enough time for her kids if she engages more with her business. To me, it made a lot of sense. Below Deck‘s Kate Chastain didn’t feel the same way, and she let Teddi know in no uncertain terms.

This OG feud on Watch What Happens Live helped put the show on the map. The Countess Luann perhaps consumed a few too many beverages. Cat Ommanney from the canceled Real Housewives of DC’s frankly found the Countess full of shit.

Andy found the fight epic enough that he offered Cat a full-time Housewife position on RHONY. She would’ve been the first Housewife to fully crossover franchises from full-time status to full-time status. Cat turned down the opportunity. It’s too bad. I would’ve loved to see more of moments like what happens in this video!

Only on a show like WWHL and a network like Bravo could a feud between two female A-list actors make this list. What started their feud? Politics. Apparently, Debra has no intention of addressing it face-to-face according to Susan Sarandon.

Housewives superfan Michael Rapaport appeared on WWHL with Kenya Moore. Kenya, the non-violent Zen-type that she is did not like what he had to say. This is WWHL feuding at its best.