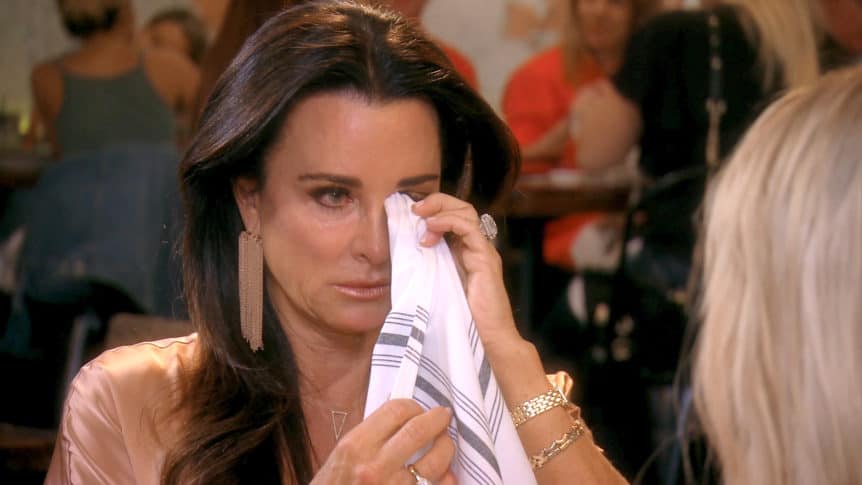 If you're brave enough to admit you love The Real Housewives Franchise in public, you've received a dirty look or rude response that made no sense to you. Once, someone responded to my telling them how much I like Real Housewives with "why not just watch Jerry Springer?"

"Why? Because you're an asshole, that's why," I wanted to say. Naturally, since this isn't Housewives, I wasn't able to.

Bust out the tissues, everyone! I've listed ten of them here to give you lots of feels all in one place!

While Phaedra Park exited The Real Housewives of Atlanta in utter shame, she touched our hearts in several moments.

People are more than just one thing. Though what Phaedra did to Kandi should not be forgiven, there's no denying Phaedra is good mother to her children. This scene between her and her son Ayden when she drives him to school for the first time tugs at your heart strings. Parent or not, this moment from RHOA likely got you a little misty.

Watching Stephanie Hollman come into her own as a woman feels like a privilege. At first glance, many wrote Stephanie off as Ethel to Brandi Redmon's Lucy, but since season two of The Real Housewives of Dallas Stephanie has become a boss on the show in her own right. She didn't choose to do it by starting false arguments with friends or by standing out as the most shocking. Stephanie became a powerhouse on the show by showing us how brave she is. Stephanie's fearlessness takes the form of vulnerability.

Moments similar to when Stephanie opens up and discusses her suicide attempt put the "Real" in Real Housewives. She exposes her soul to us in the most beautiful way, honestly and with humility. I can't speak for any of you, but this moment made me cry harder than any other on the franchise as a whole.

Unfortunately, Bravo doesn't make available the scene I wanted to show you. However, Bravo kindly gives us this other clip of Kandi Buress' daughter talking to her estranged father.

Several times during Kandi's tenure on The Real Housewives of Atlanta, Riley's relationship with her father came up. Often times, the result of Kandi seeing her daughter in pain makes her cry. However, one scene in particular makes us all a little misty.

Riley receives a phone call from her father who tells her his new wife expects a baby soon. Riley ends the phone call in tears. Her father was this tone deaf to be this excited around his daughter that he barely speaks with? One he skipped out on raising?

For all the children that had it rough with our parents, Riley's pain was our pain. And it broke our hearts to watch it.

I'll admit that, at first, I wasn't the hugest Karen Huger fan. I felt that she treated the other ladies on the cast beneath her. I had no idea what really went on with her. Both Karen's parents died within several months of each other. Both had Alzheimer's Disease for years which badly affected them. Anyone with a loved one who suffered from dementia or anything like it knows how heart breaking it can feel.

That season, Giselle pounced on the fact that Karen had marital troubles in addition to tax issues and made Karen feel incredibly uncomfortable. Giselle openly mocked Karen's predicament when she wore a t-shirt that brought attention to the private financial issue Karen had.

At the reunion, both women went at each other. Not long after, Karen broke down in tears. It was so different than other times Housewives cried over an argument or feeling embarrassed. Karen cried from her core. Anyone that's lost a parent or loved one knows that pain. That's why they cried right along with her. We owe Karen for giving us this moment. She truly is the Grand-Dame of Potomac! Heck, she's this generation's Dominique Devereaux, and she's not apologizing for it.

'Twas the sophomore season of the dual being known as Erika Girardi aka Erika Jayne. Everyone loves Erika and sticks up for her when P.K. says inherently cold. I thought that was one of the cruelest things ever said on the Housewives. Luckily, Erika is anything but cold, and she shows us that in this heartbreaking clip.

When Eileen tries to mend the relationship between Dorit and Erika, Eileen encourages Erika to forgive Dorit. "It's not like she killed your son," Eileen says to prove a point.

It might seem a bit harsh reading it, but you can see in the clip below that Eileen meant nothing from it. Little did Eileen know Erika's son recently returned from the funeral of another police officer who died on the job. Eileen's comment triggered Erika and her fear over her son's safety to say the least, but we don't blame her. What mother wouldn't feel that way?

Erika is a class act and soon apologized to Eileen. They remain great friends to this day.

To some, Nene Leakes is a goddess. To others, Nene's head might look a bit swollen from some angles.

That particular season, Nene fought with all the ladies on the show. At times, Nene appeared cruel and at others, dismissive.

Nene's hard shell came crashing down at the reunion that year when a psychiatrist on the show brought up her relationship with her mother. When we discover the source of Nene's pain, so much of her personality makes sense. Take a look at the clip below if you don't remember exactly what I refer to here.

The OG of the OC is no shrinking violet. She's caused more than her fair share of drama. There's a lot more to Vicki Gunvalson than just that though. Sadly, we didn't want to see it like this.

In season ten of The Real Housewives of Orange County, Vicki receives a phone call from her brother telling her that her mother has passed away. Vicki falls to the floor in tears and so do we.

I couldn't find the exact clip, but I did find this clip of her discussing it with Andy Cohen.

What Housewives list would feel complete without mention of Dorinda Medley? Dorinda joined Housewives  in season seven and quickly turned into a franchise icon.

Most of us find Dorinda authentic in a way we don't find other housewives on other franchises. Dorinda can't seem to keep her emotions inside. A lot of us have the exact same problem, especially in New York City!

Seeing how deeply injured Dorinda felt by how Luann treated her almost made me cry as hard as Dorinda cried in this clip. We all know what it feels like when a friend treats us like a piece of shit, especially when you treated that friend like gold.

Unfortunately, I couldn't find this clip online. You can watch it in the first episode of season nine of The Real Housewives of Beverly Hills.

Lisa Vanderpump is a fan favorite for sure, but she's also manipulative. She sets up Kyle to look like a bad friend for not supporting her when she knew Kyle physically could not do that for her.

Typically, nothing phases Lisa Vanderpump. However, after the death of her brother, when Kyle fights back against Lisa for trying to make her feel like a piece of shit, Lisa breaks down. She sobs saying she doesn't know why she's saying what she's saying, and that's she's sorry. It's a moment all too real for Vanderpump. We wish her a swift return to the show after leaving this season!

Carole Radziwill has always felt like the most elusive and unique Housewife. She never forced drama or felt the need to be near it. Some people thought she might be a little boring. I just found her to be authentic. In this clip which is one of the few times Carole opens up, she discusses her late husband and carries his ashes to a new destination.

You know I have to ask what you thought. Did I manage to mention your favorite Housewives moment that brought you to tears? Did none of these affect you in that way? I genuinely want to know in the comment section below, so let's have a conversation!